1983 – The owners and directors of Gryffin, John Mythen and Steve King, are contracted to ARC Humes Fencing, and provide their first major contract, upgrading the barbed tape on the perimeter fence at Ararat Prison.

1986 – The light bulb moment occurs where John and Steve see the opportunity to be the first Australian manufacturer of barbed tape, and incorporate Gryffin Pty Ltd. The company name and logo are based on the guardian, half lion and half eagle mythological Griffin.
– In this year they purchased their first factory in Upper Ferntree Gully Vic.
– And built their first long barb Tigertape™ machine and started local production. Today, we remain the only Australian manufacturer of barbed tape (also generically known as razor wire), both long barb and short barb.

1988 – Gryffin expand and purchase a larger factory in Bayswater Vic.

1991 – A second factory is purchased in Bayswater Vic.

1994 – Design, manufacture and installation of steel fencing and gates begins, in addition to our Tigertape™.

1995 – We developed our industry first ‘Cowl and Tyne’ fence top initially for Dame Phillis Frost Centre. The design is later adapted for other high security applications.

2001 – The Gryffin Maxiguard™ curved pale product was born with introduction of our pale curver.

2013 – We invented and deployed a bolt on duct support cradle to allow increased fence post packing density for shipping to Darwin, saving significant costs of shipping.
– For the same job we invent a hinged duct strap to allow one person faster and lower cost installation of duct straps.

2016 – Gryffin’s correctional grade relocatable fence system is enhanced to provide side to side and back and forth adjustment to allow for sloping ground, and becomes a great hit protecting construction workers in active prisons in both Vic and NSW.
– This is the same year we designed a new fence system capable of withstanding 5kN crowd loading in response to Correctional increased standards which is deployed throughout Victoria.

Today – With both John and Steve semi-retired and acting in a consultative capacity the business is run by the General Manager and Gryffin team.

With a direct designer/manufacturer channel to market we set ourselves apart with our unmatched expertise and experience in providing an end-to-end service, from initial consultation and risk assessment, custom and innovative design, manufacture, project coordination and if required installation through endorsed expert subcontract installers.

We are absolutely committed and passionate, backed by unmatched know-how, to provide the security and protection that’s needed, with all aspects performance matched to budget. It’s what we do, every day. 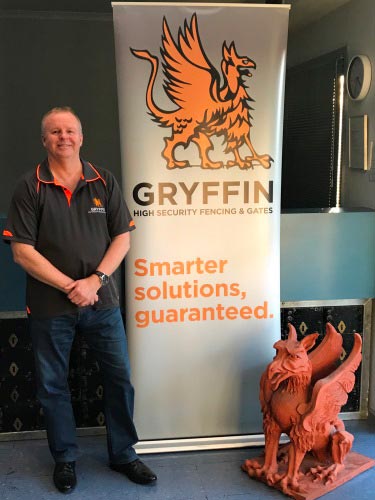 Happy customers are the life blood to Gryffin. It's our highest priority

We pride ourselves in being experts in what we do, so that we do provide the 'just right' solution, and set ourselves apart from others

Is at the core of our product innovation, smarter solutions, and business best practice

We are so committed and passionate about what we do, that we guarantee all aspects of our workmanship to provide fit for purpose products and solutions

Our Integrity and commitment to Health & Safety overrides all else, no matter what

From our head office and manufacturing facility based in Bayswater Vic we reach out and service prospective and existing customers all over Australasia. Please send us a message or give us a call so that we can assist you with your needs for high security fencing and gates. It's what we do, every day.